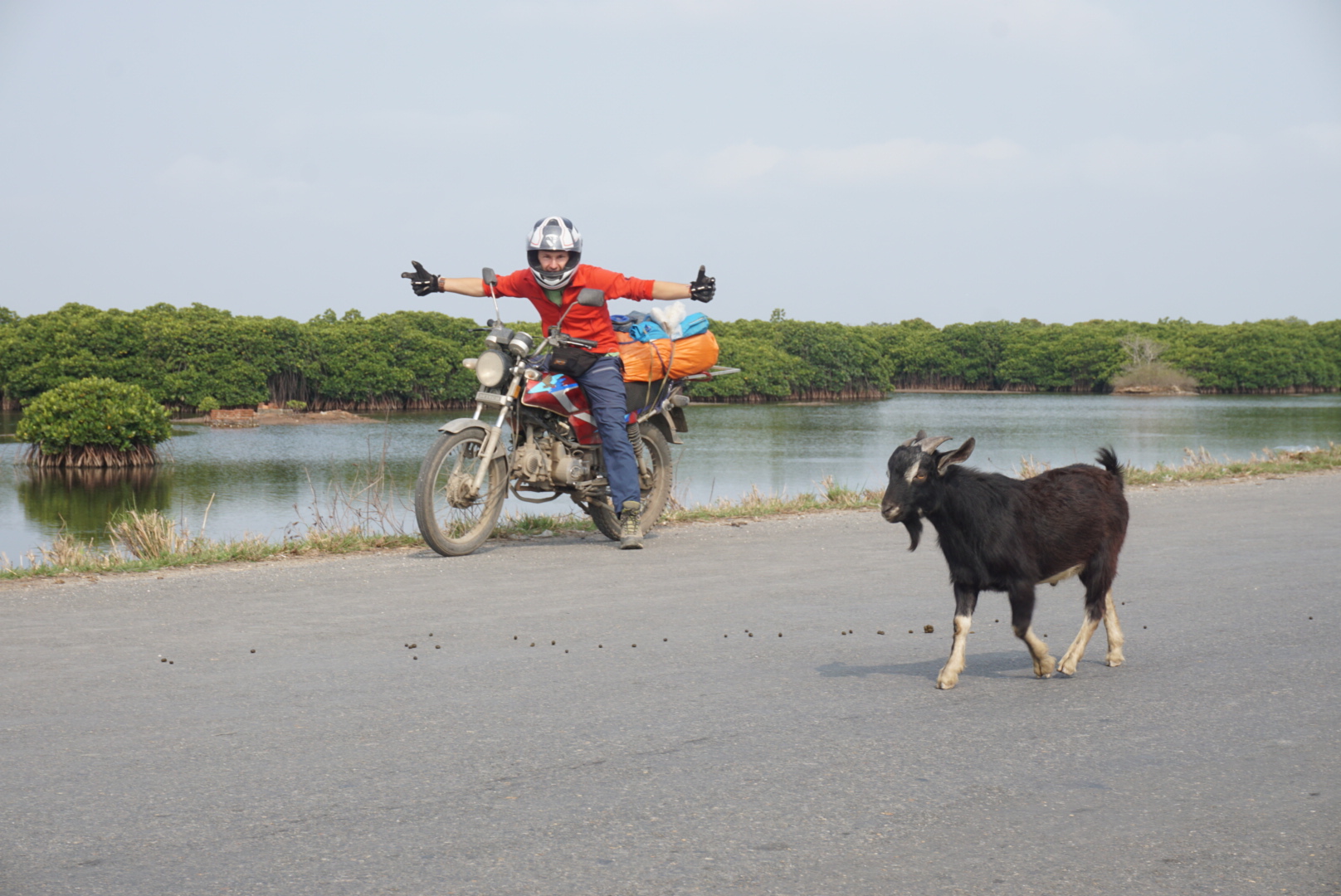 The day before we were wondering what time should we wake up to have enough time to get to Hanoi and do everything we had, and wanted to, do. Breakfast started at 7:30 and by that time we wanted to have our backpacks already strapped to the bikes.

– no way, you always need ages to pack

The rules were easy: if I manage to wake up at 6:45 and by 7:30 be ready for the breakfast Steffen will strap my backpack t9 my bike for the next two days. Otherwise I’ll rake care of his luggage. Guess who win! At 7:25 I was sitting on an outdoor chair waiting for my breakfast. Thanks to that bet it was our earliest morning on the road. We drove 40 minutes to the harbor. It was a quite picturesque drive with many water-forests. 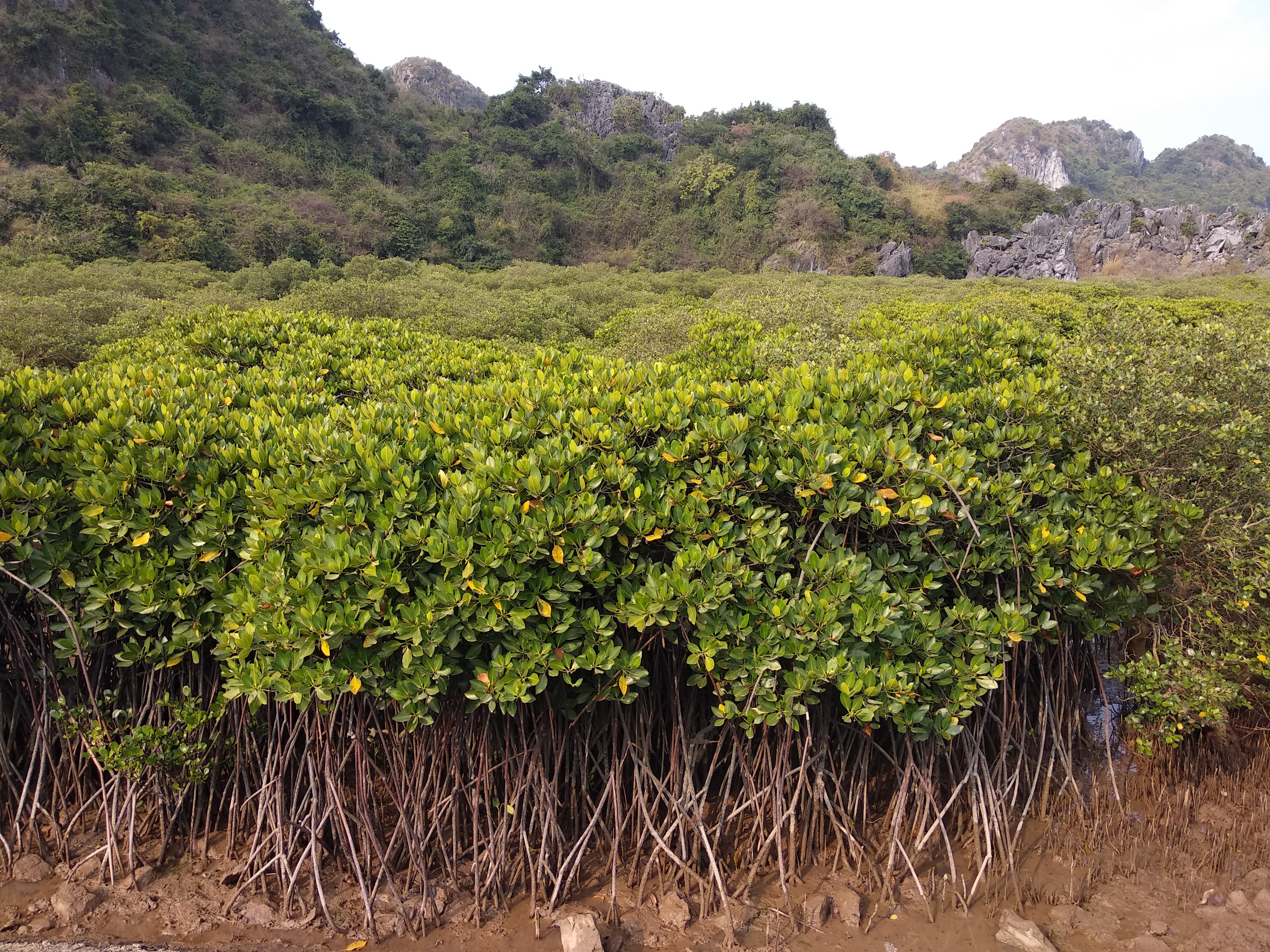 We came from Ha Long and we left towards Haiphong. This ferry ride was shorter and uglier than the way to the island. It was also 3 times cheaper so we didn’t complain. We were still had 2 hours of a drive upfront. After an hour my back was hurting as, I guess, driving on a straight highway in one position loads it hard. Eventually we made it to Hanoi. 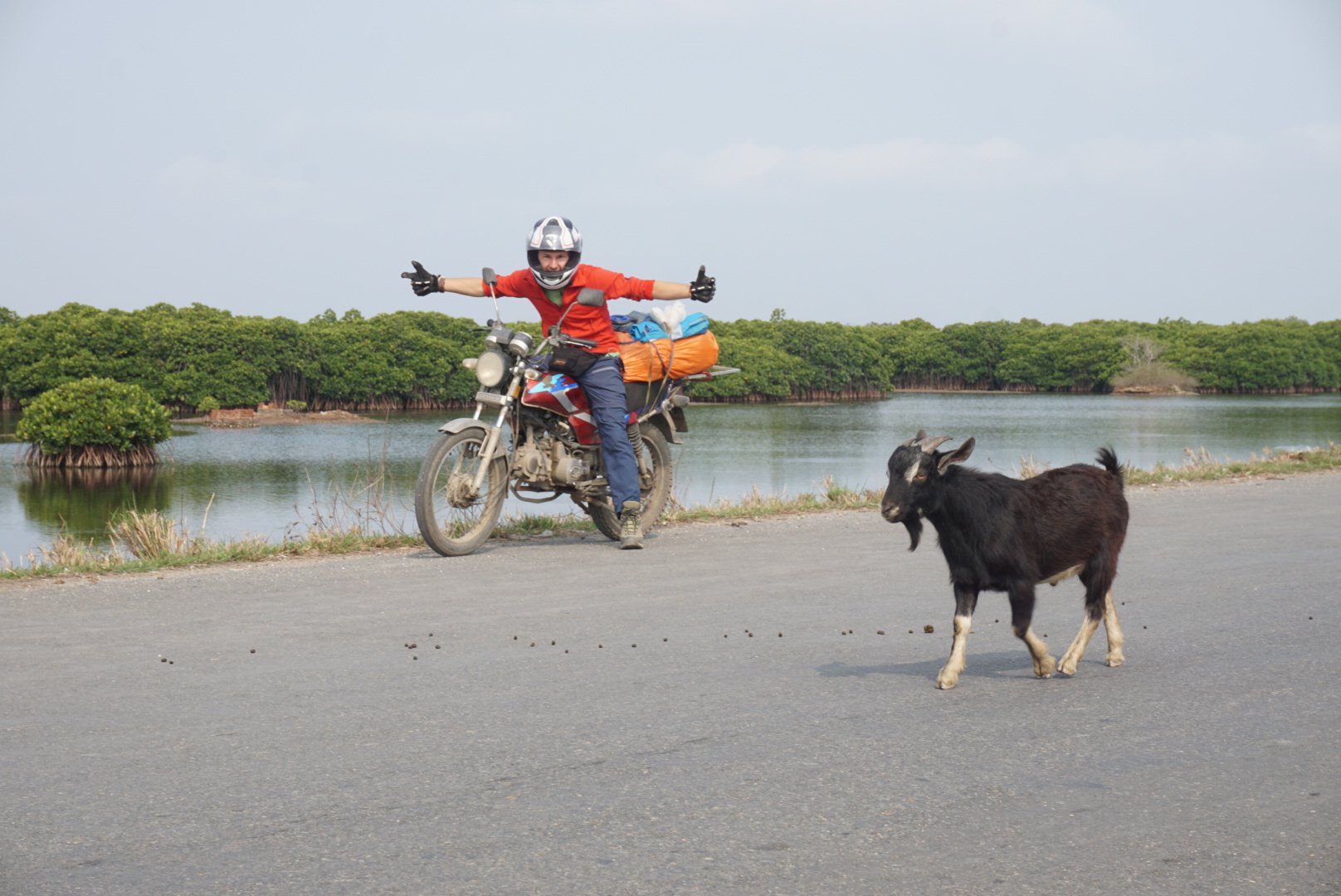 First we had to leave our backpacks in a hotel. Its name was May de Ville Famous Hotel (no, it’s wasn’t a 5-star resort, all of the Hanois places have stupid, posh names). As it was the cheapest, 3,50€ hole it didn’t have a designated parking lot. And it’s extremely hard to find one. We parked in a small alley in front of May de blabla and after 20 milliseconds someone was already yelling at us that we shouldn’t park here. We only leave our backpacks and we take them, no worries we said and went inside. Of course, for 3,50 you can’t expect much – Sorry, check in at 2 pm. By the time we put our packs in a storage room another women was already inside yelling that the big bikes are there and they shouldn’t be. Vietnamese people are extremely impatient. If you don’t respond within a second they will tap your arm to yell at you just to make sure you hear them. Forget about ignoring the food vendors. You have to clearly say NO to them otherwise they won’t stop trying to sell you stuff. Anyways, we got out of the Ville madness and drove to my bike rental place. As a part of the contract, they promised to make a free check-up when I’m back at Hanoi. We left mine bike there and drove on Steffens to a traditional puppet theater! We were lucky to get tickets for 13:45 play. After another hassle of finding a parking spot we grabbed quick Ban Mi and went ti see a play. 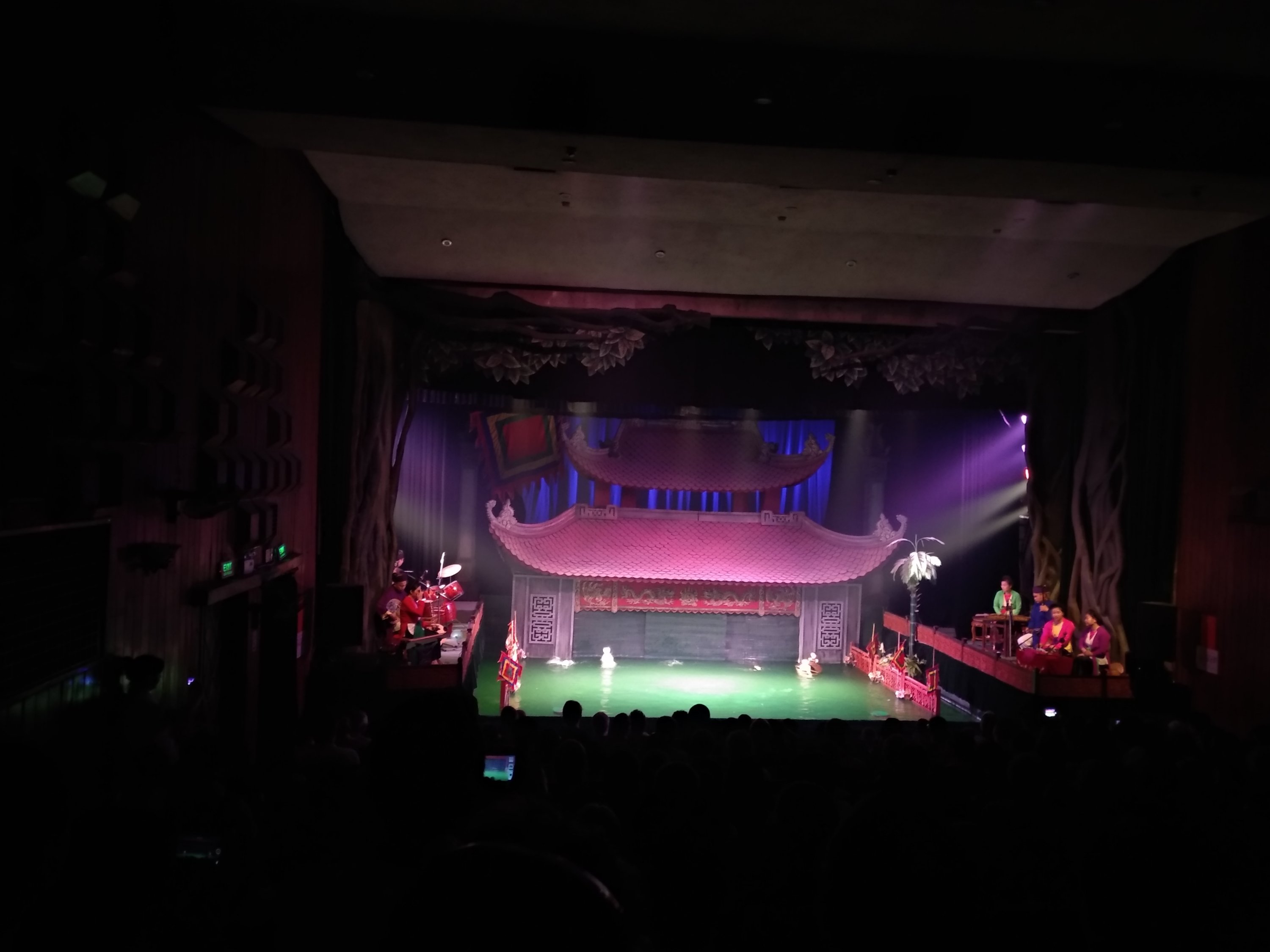 We didn’t understand anything but we enjoyed listening to the sounds of traditional Vietnamese instruments and watching amazing puppets jumping on a scene full of water. It was a great experience! 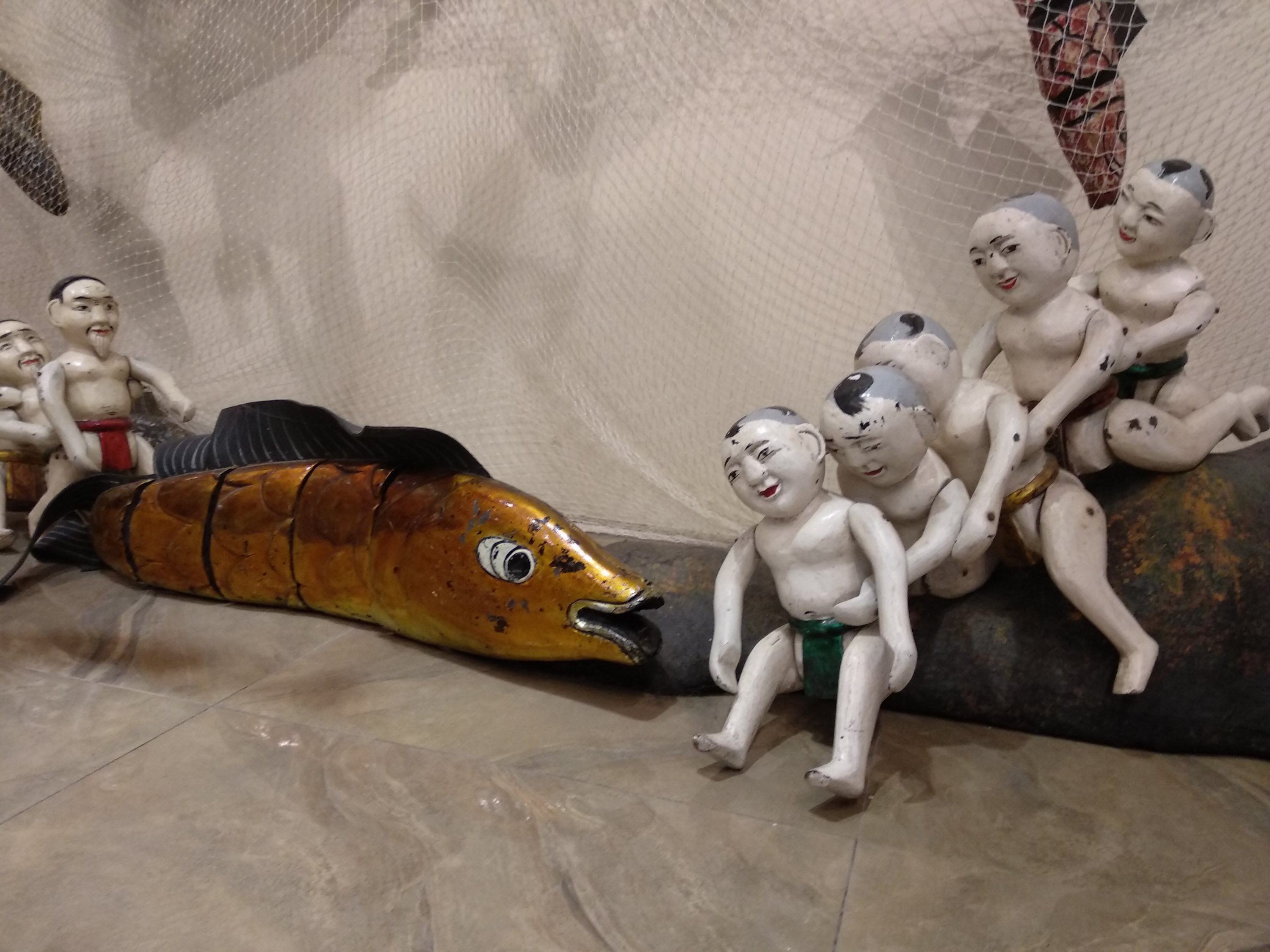 After the puppet show we went to try a Hanois specialty – egg coffe! In the past milk was a luxury and most of the people couldn’t afford it. Therefore, the local barristers werw looking for replacements. They came up with a brilliant idea of whipping egg yolks with sugar and adding on top of the coffee. In polish I would call it Kawa z Koglem-Moglem. It was D E L I C I O U S! 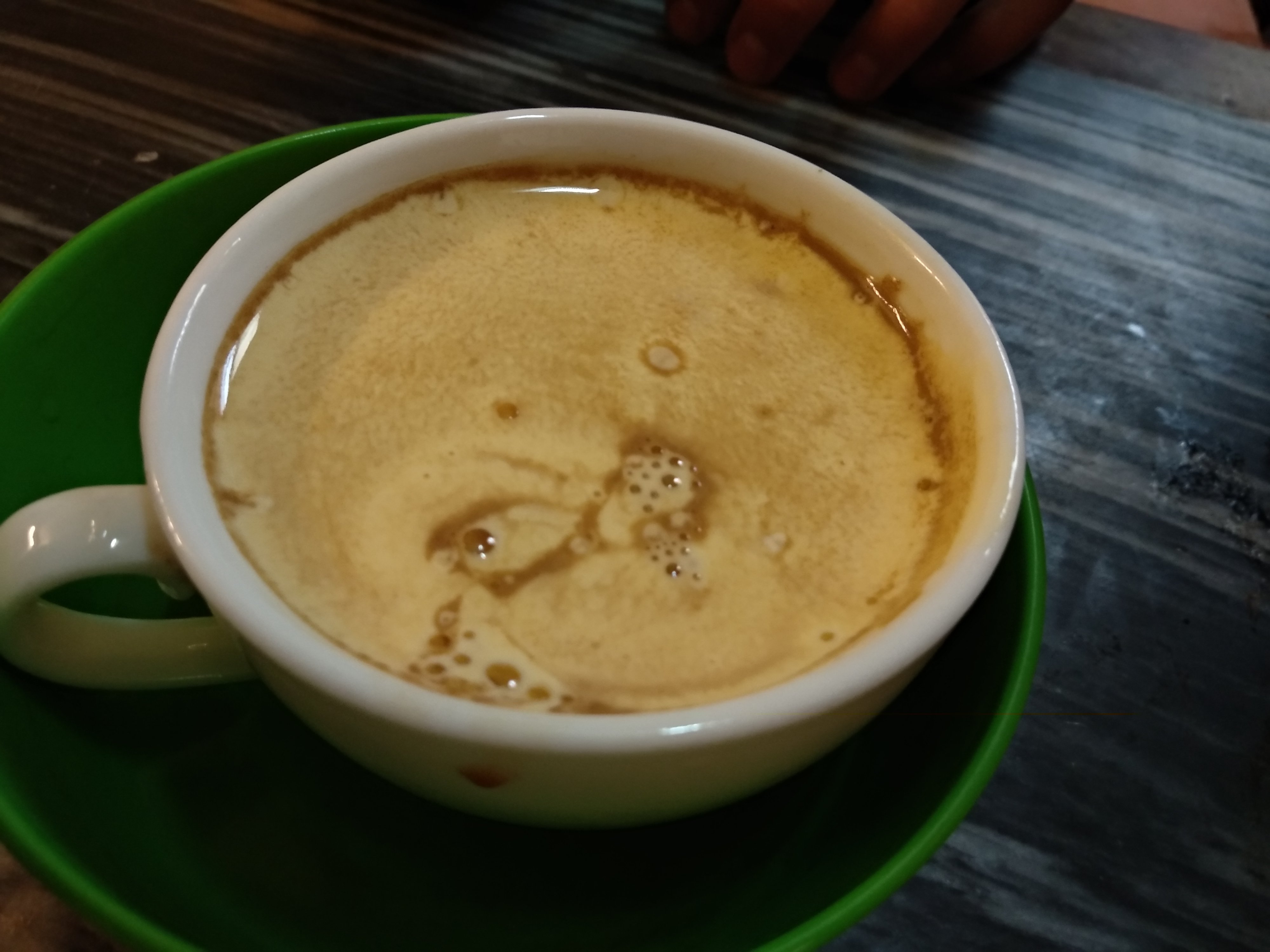 Next stop on our quick Hanoi sightseeing list was an Emperiol Citadel of Thang Long. It used to be an important political building and during the Vietnam War it was a headquarter of the defence against the US flight attacks. Thanks to the people who were working there Vietnam could celebrate its victory on 1975. 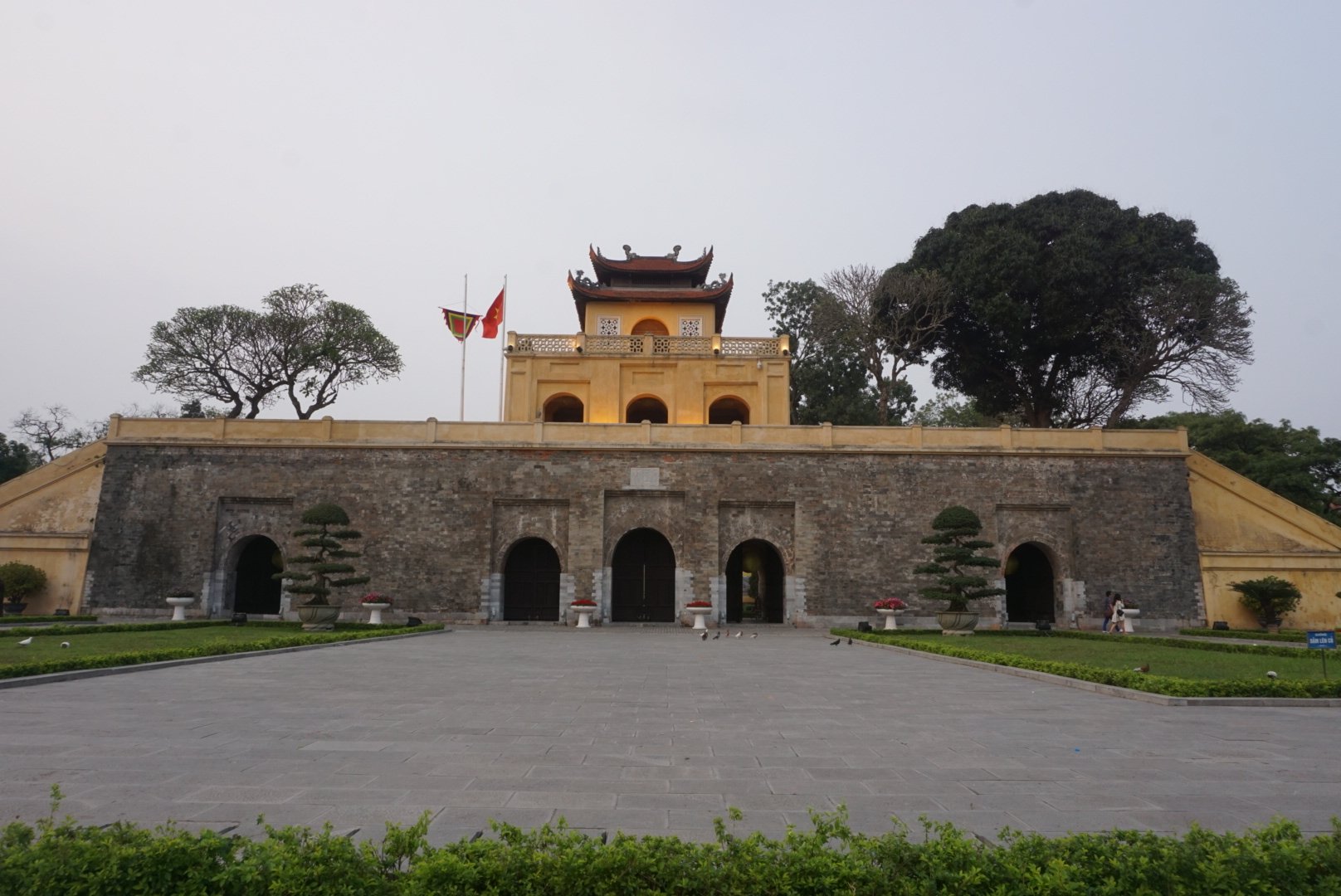 Today its one of the UNESCO World Heritage sites. Disappointed of low tides and not being able to climb in Cat Ba Steffen decided to climb a random wall. 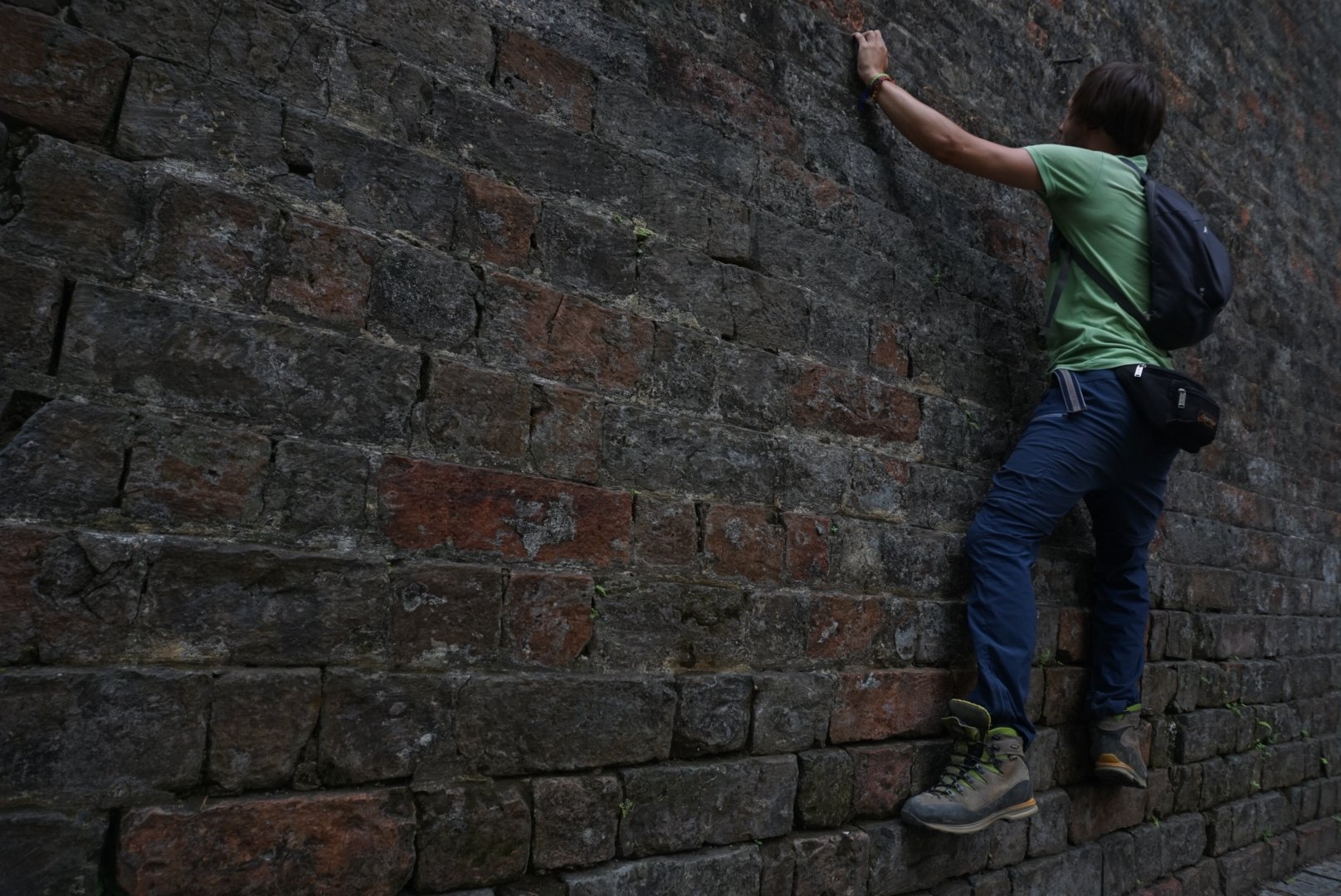 All of that walking made us well hungry. Following the suggestion given to us tbe day before we went to a small place to try Bun Bo Num Bo – noodle salad with beef, grilled onion, beef and many more. Again that day – awesome choice! 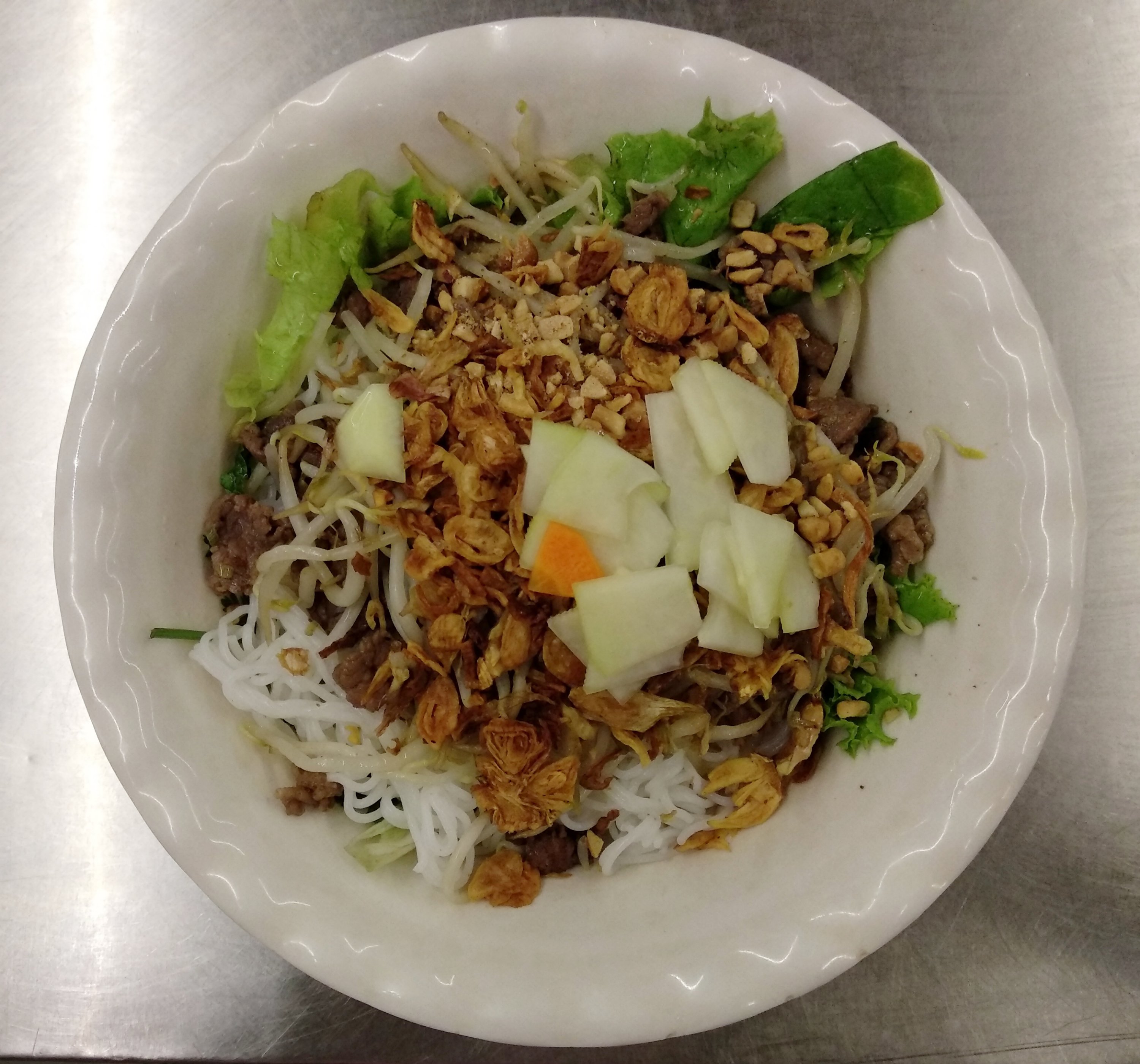 We planned to walk around for a little more when passed by St. Joseph’s Cathedral. As it was Holy Saturday and mass was about to start, its interior was almost full. Every mass attendant became a small candle – symbol of life which later on were lit as a symbol of Resurrection. Once we got them too, we decided to stay for the ceremony. Vietnamese mass was exactly the same like in Poland, even some songs had the same melody. Even though we were far from home and we couldn’t understand a word it felt good to be there. 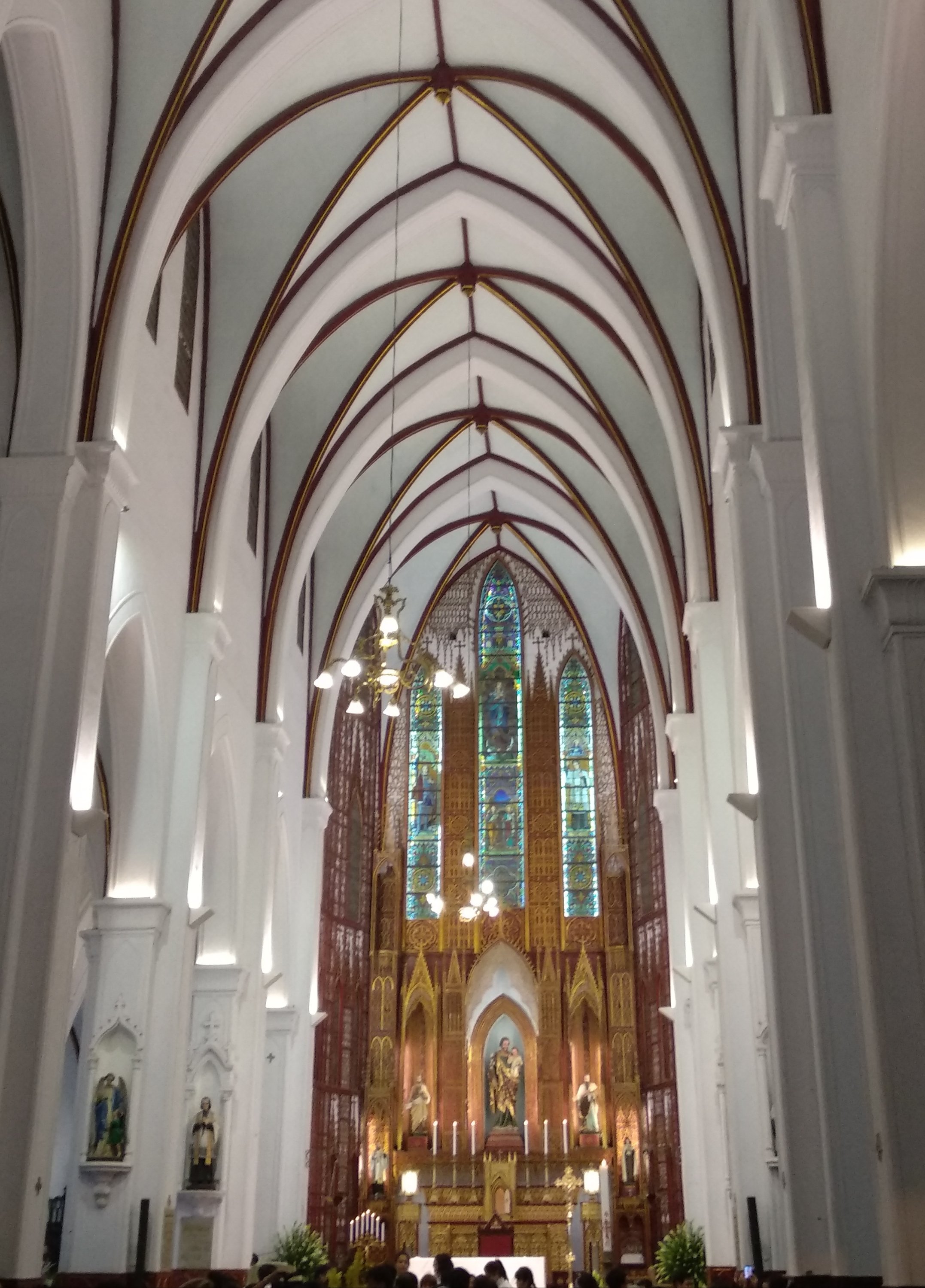 After solid 3 hours, at 11 pm. we were ready to go back to our Ville and check in. On our way we found ourselves on a pumping street full of people and loud from the music. Everyone were sipping drinks on tiny, plactic chairs which bars located in front of their entrances. We couldn’t say no to staying awake a little longer and watch that crowd. Eventually, around noon we arrived to our lovely dorm and fell asleep like the babies.