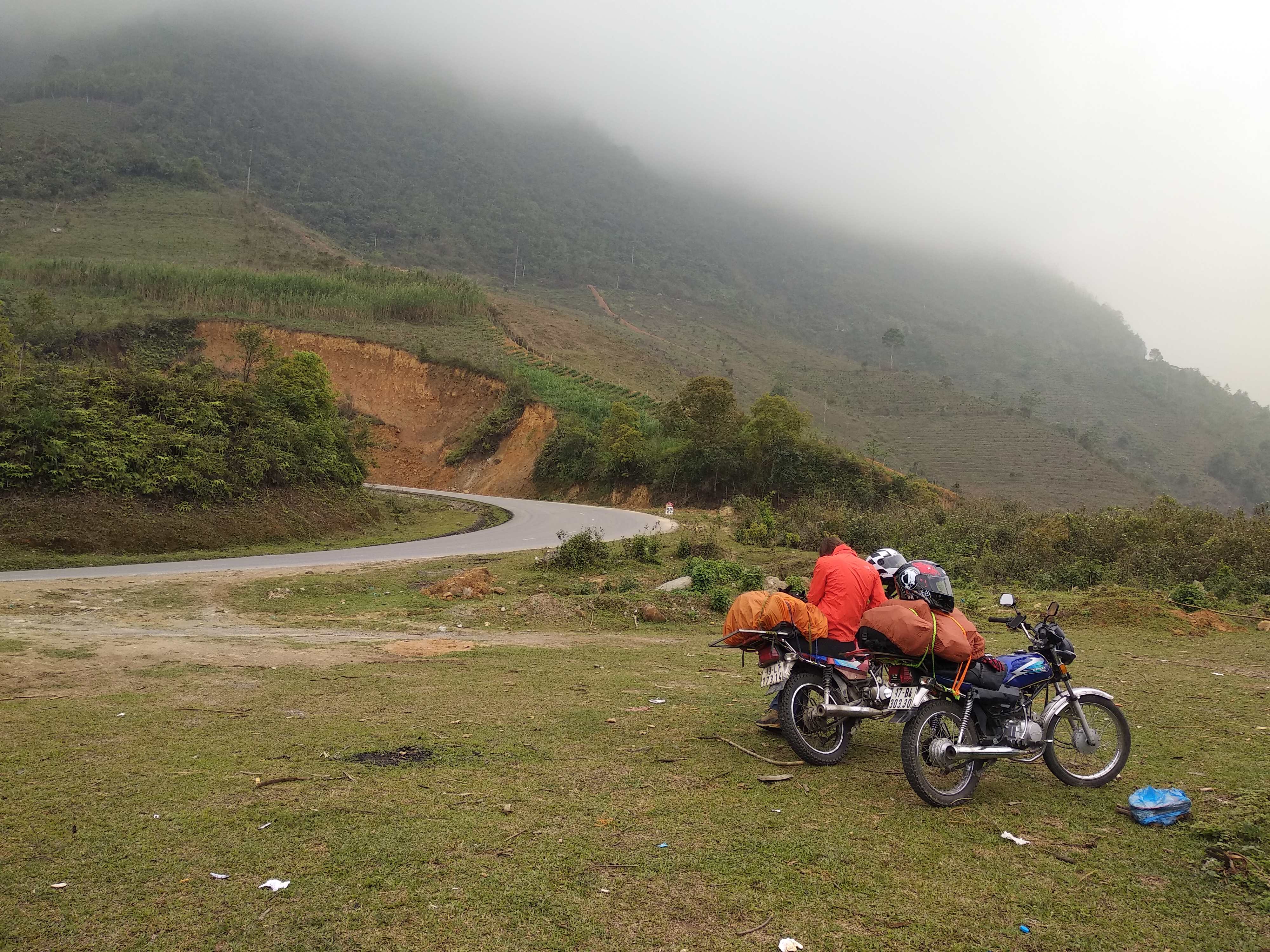 It wasn’t really our day – we slept in a bit, until maybe around 8.30. Afterwards we started researching where to go next. Man – it was hard! Together with two czech guys who were staying in the same homestay, we were checking out some mountains that we could hike to… It turns out, there is plenty! However, trying to find a route or way up, that’s the hard part! Unfortunately, our most beloved travel companion maps.me (best offline map app on android!) does not have very detailed maps of this region of Vietnam. Very unfortunate.

After almost 3 hours of useless looking for routes up to a close-by mountain, we finally gave in and jumped on our motorbikes. After grabbing very-late breakfast in the city of Nghia Lo, we were off to supposedly one of the best mountain passes in Northern Vietnam. If it hadn’t been for the weather, it would have definetely been a great ride. 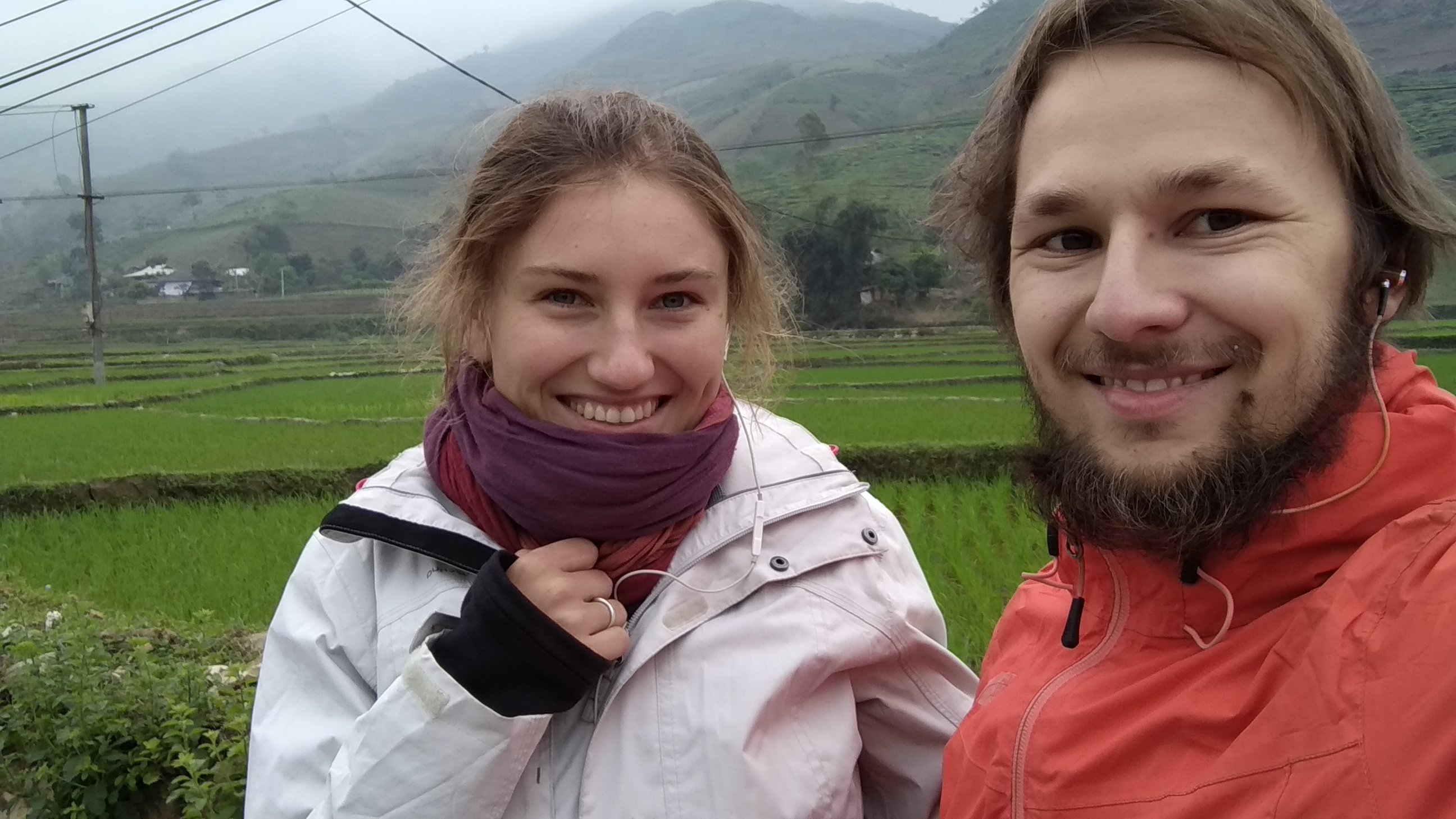 But thick clouds hang above us the whole day. Two hours into our ride, it suddenly started pouring rain and before we could stop next to a family’s house to find some shelter, we were already completely soaked.

Very welcoming vietnamese people invited us right away into their house and the next 1 1/2 hours were very interesting. 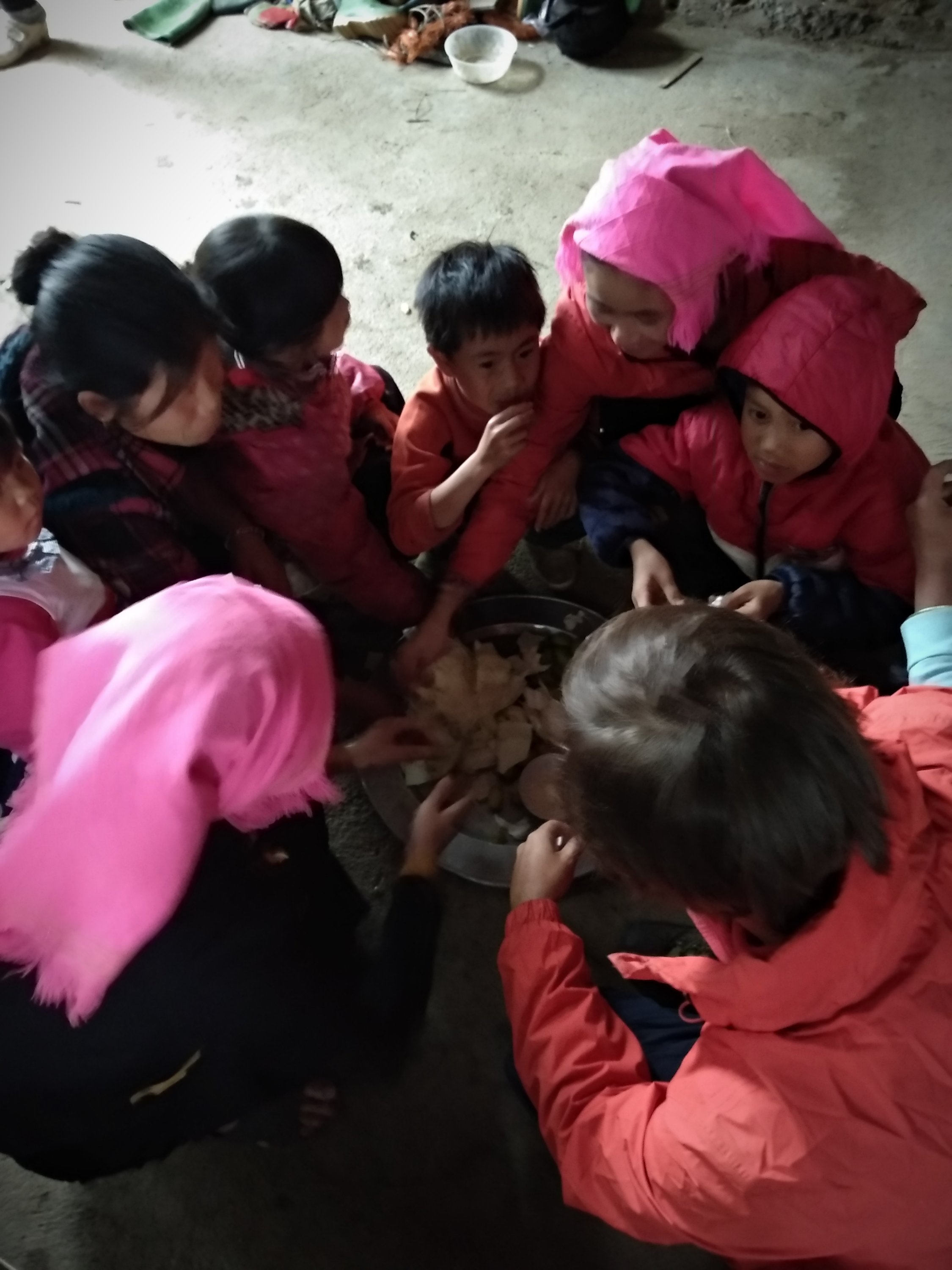 As we came in they were just stuffing some dead animal with herbs. Natalia had found out that people here sometimes eat dogs. I had a short glance at the animal and thought it is a pig, or is it not? After using our modern technology, Google translator, one young guy confirmed it’s a pig. And shortly after we discovered a few more alive pigs in their backyard. 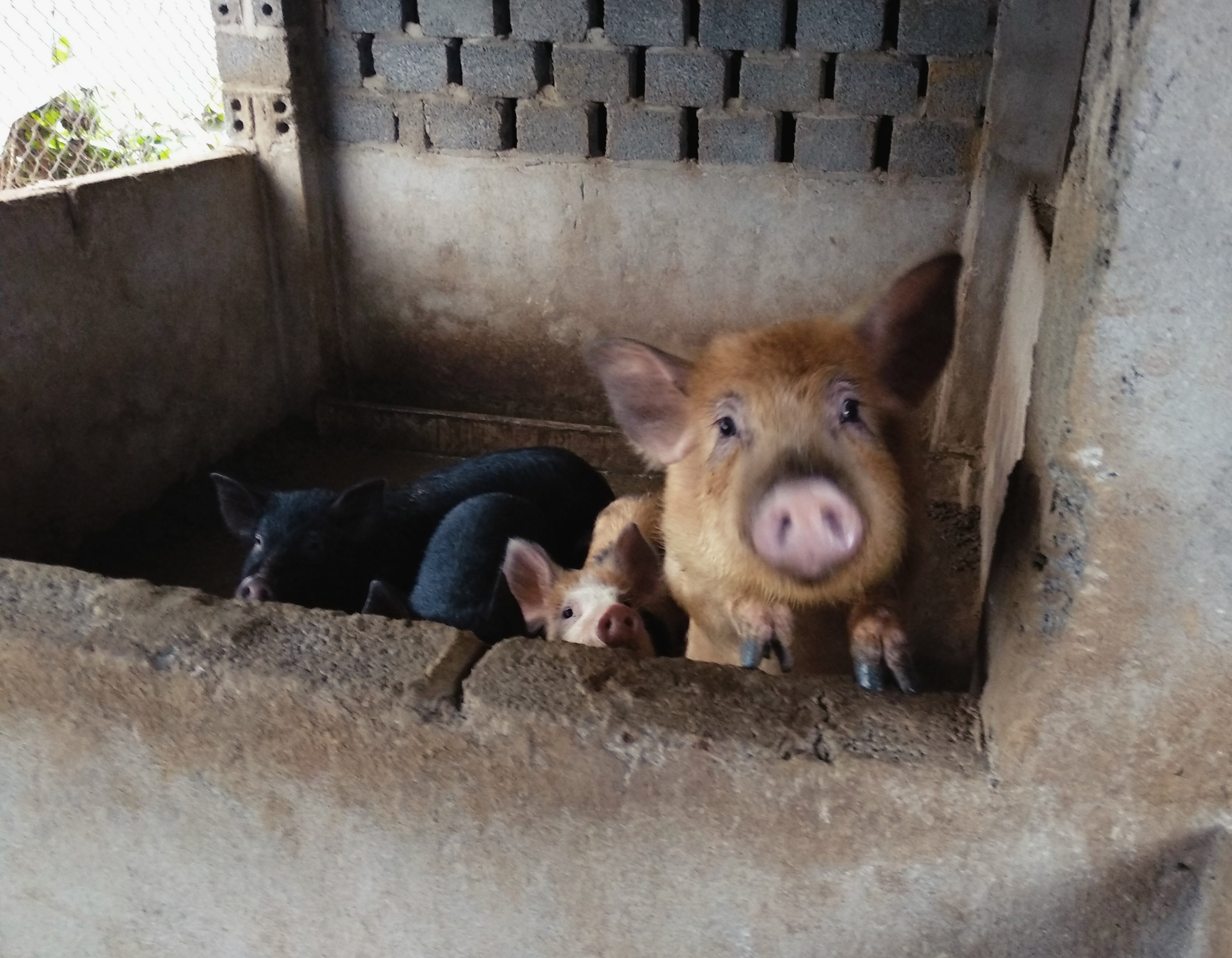 The pig was on the fire, the whole family gathered, two strangers in the middle of their kitchen. We tried to do some conversation but nobody was speaking English here – not even the young people. So our only resort was sticking to Google translator, which seems to work quite fine for easy, casual conversation. Upon leaving, the guy insisted that we stayed longer, played with the kids, and drank some later on. We could hardly say no, but we also couldn’t, or didn’t want to stay for too long. Even though the pig would make a delicious dinner! So we told him that we could stay just a little longer. We joined the kids for some football in the house while the rain slowly ceased. 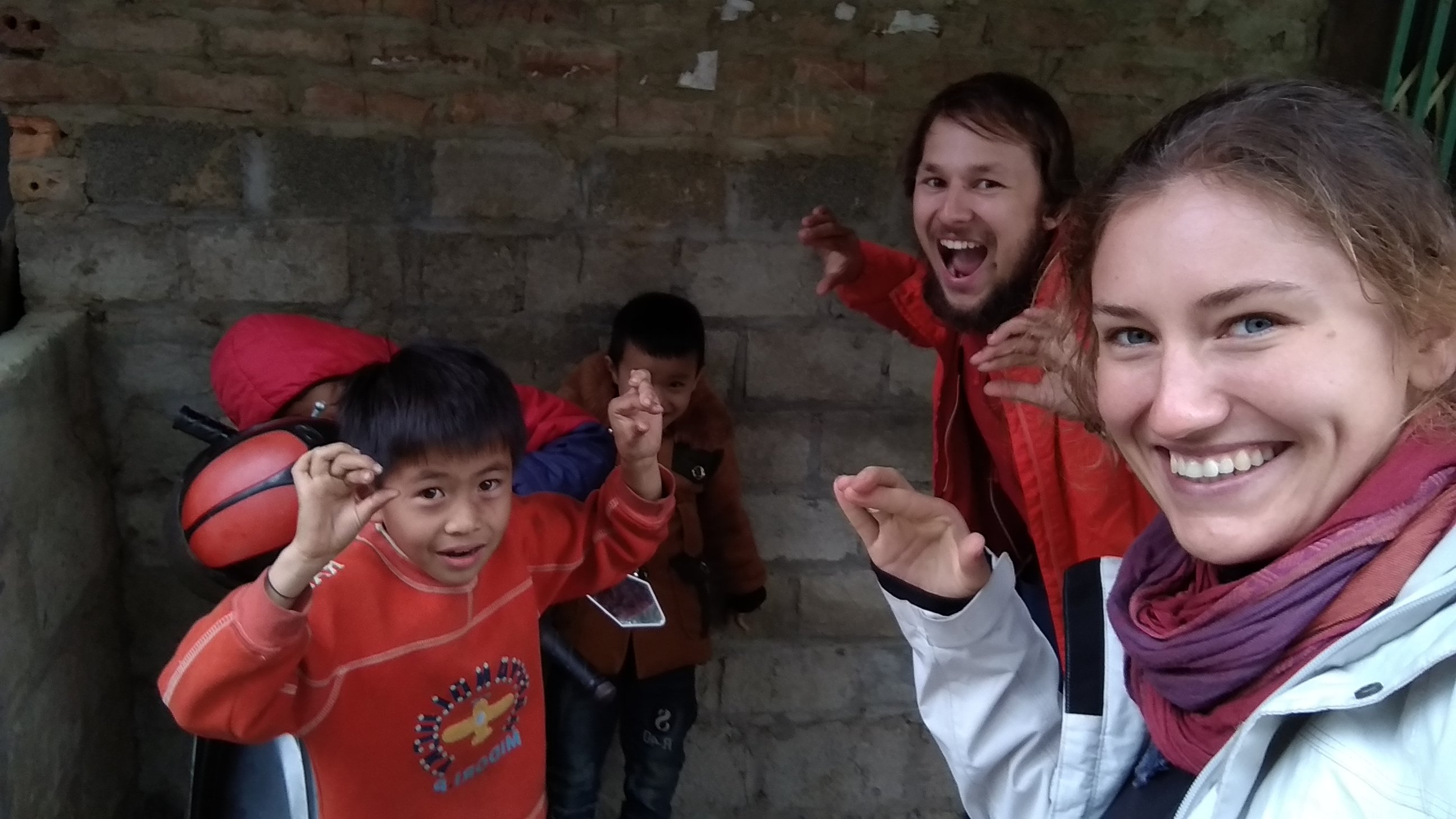 Since we started so late and due to the rain, we had barely done 50 kilometer and it was already 3 o’clock. We drove for another 2 1/2 hours, mostly through the clouds. Having wet pants and driving at 10°C on a motorbike with 50 km/h made us feel cold for most of this time. 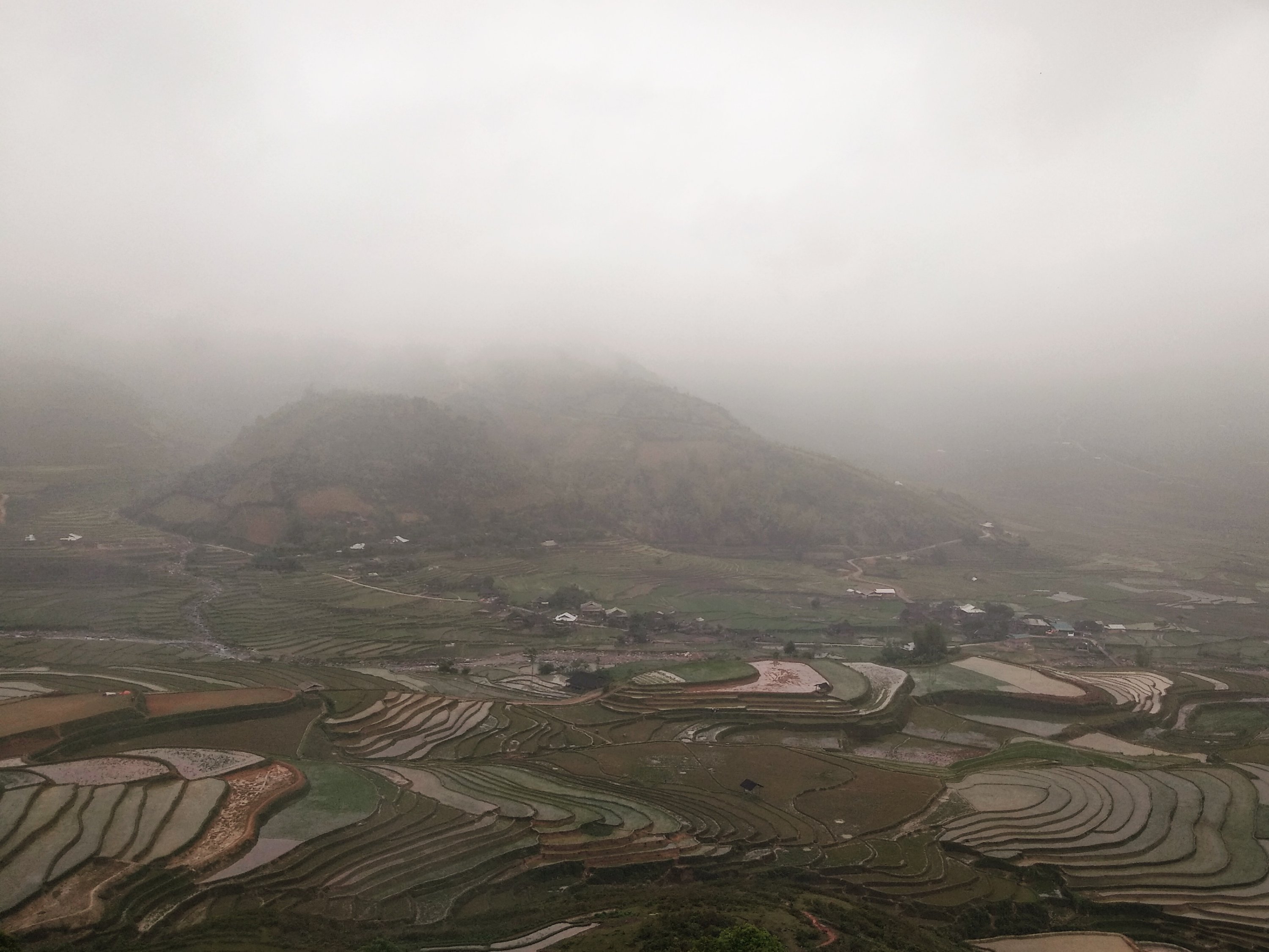 We finally made it to the city of Mu Cang Chai and soon found a small homestay. While there are enough hotels or homestays to stay, these are not on booking or agoda, and most likely not on Google maps or maps.me. Therefore it’s back to the roots – drive around, stop, ask for the price, and do that until you find a place you like to stay at. 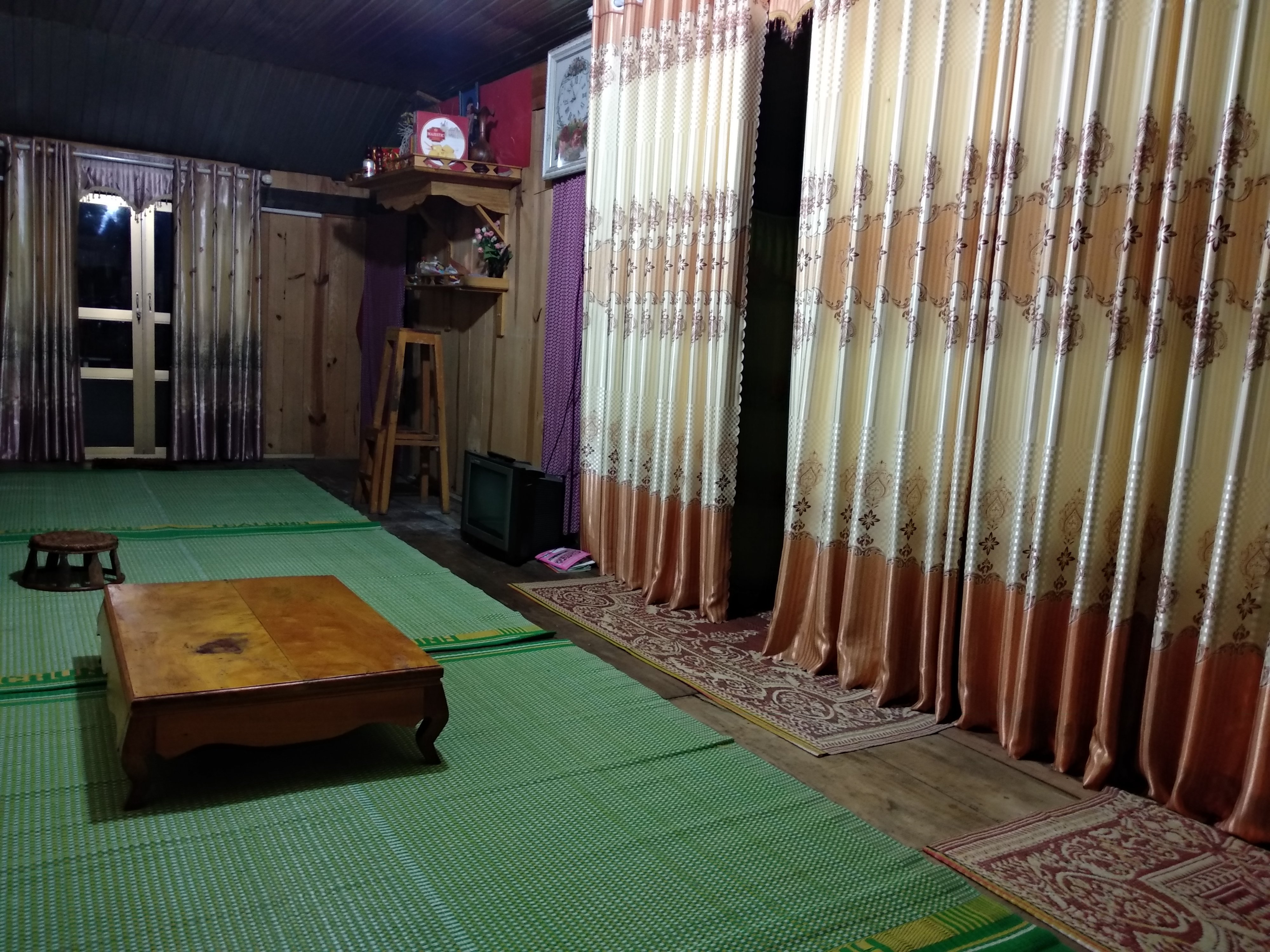 To finish the evening we had a great dinner here! Tomorrow we will go even further north, quite close to the Chinese border and hopefully have some thermal baths to rest in.