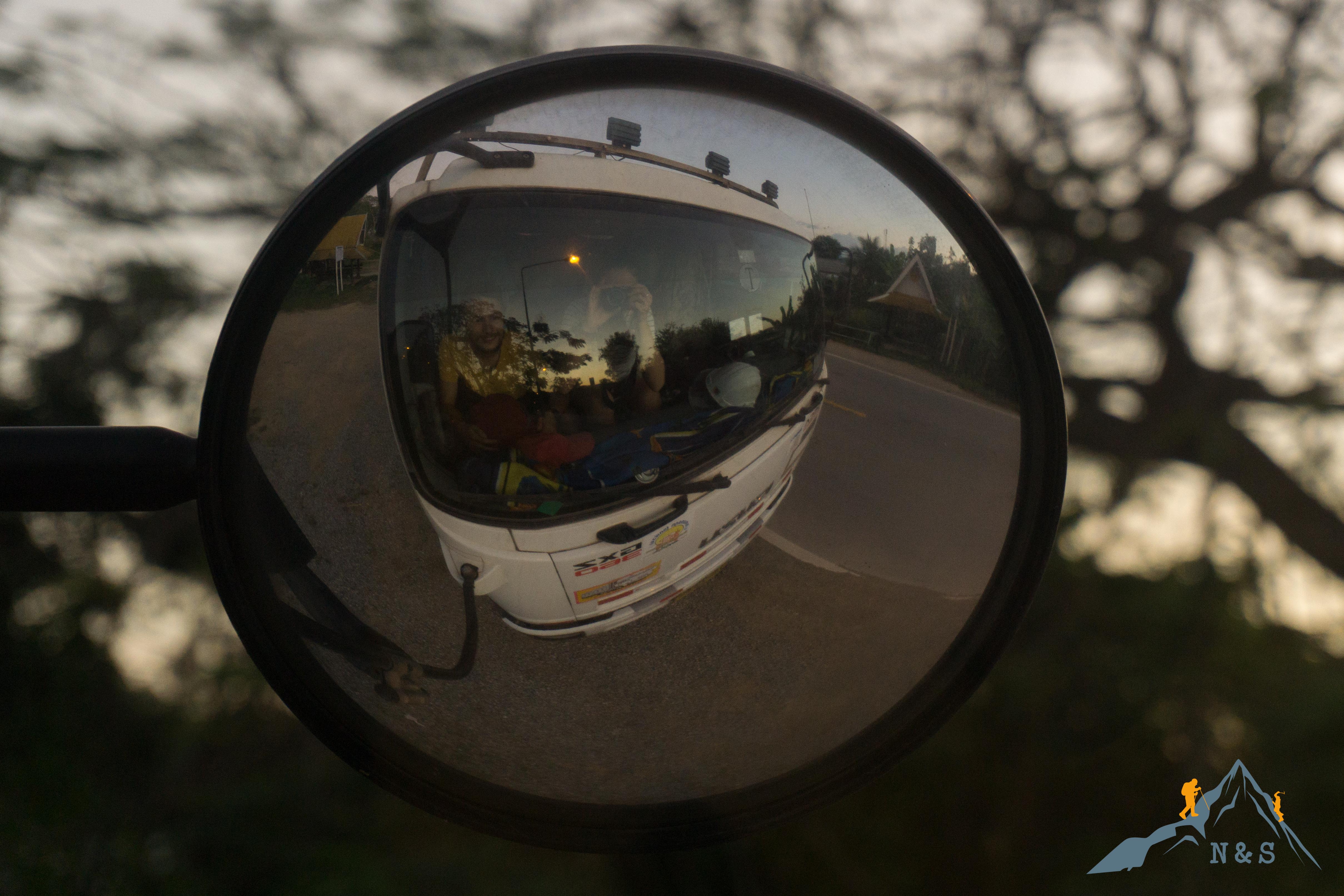 Standing just outside of Yangon on the express highway that leads north all the way to Mandalay, Natalia was waving her hand up and down to catch us a ride. While in Western countries you point your thumb up, here, in South East Asia nobody would understand that gesture. Instead, you hold out your arm to the side and wave up and down with your flat hand.

We were just joking that for once we need to hitchhike a "premium" class car, so maybe a German or any other "expensive" one, when a car passed by. A few hundred meters down the highway, it suddenly stopped. "Did they stop for us?" we asked ourselves. They started rolling back towards us! "Yes, they did!"

Just a moment later, we were sitting in a Ford Everest SUV with two lovely women, driving to Naypyidaw, just where we wanted to go. "Can we already call this a premium class car?" I asked Natalia quietly and secretly we gave us a high five!

Catching a ride out of a big city is quite hard and especially in Yangon - basically impossible. Therefore, we took the train and a bus outside Yangon to get to the express highway. In smaller towns or cities, we usually found ourselves walking to the border of the city or even further outside. But don’t hesitate to just try it in the city too. Just be prepared to be approached by a lot of taxi drivers, in this case.

So, we got a pretty good ride and were on the way to Naypyidaw. We had only small chatter with the women until we suddenly pulled over. “Selfie!” said the driver and this got the conversation started. The drivers husband is working in a ministry and all of these are situated in the capital of Myanmar – Naypyidaw. This is why she was driving there. A friend of hers joined the journey.

After another hour of driving, we did a pit stop to fill our stomachs. First, we went to the Myanmar restaurant. Two women were investigating the food but turned around and took us to KFC just next door. As we entered the restaurant, the ladies gestured to us to pick something. “No thank you!” we said, but while hitchhiking, some people really love to invite you and feel offended if you don’t accept. I always feel a bit bad accepting, but at the same time I would feel just as bad declining. Especially since it makes them happy and brings a smile to their face. We were about to bite into our burgers, when a complete picture session started. “You are so beautiful”, both women said to Natalia. Especially the driver fell in love with her and wanted to take lots of pictures, which soon found their way to her (and later our) facebook.

In the early afternoon we had arrived to Naypyidaw and we were taken right to the front of our hotel. It was a very pleasant ride and the women were so kind to us. It was a lot of fun – for us – for them! Not every ride can be that heart-warming, but almost always people will welcome you with smiles and love to interact with you.

We have put together a few tips for hitchhiking in South-East-Asia. If you have more, feel free to comment!